American Tunis: The Sheep of the South 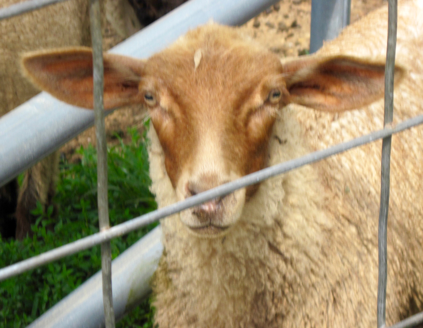 Fiber artisans who have never owned a sheep or even considered owning sheep often become expert in the characteristics of particular breeds.  They can frequently discuss at length the wool properties of different sheep breeds, but surprisingly their knowledge often transcends wool and extends to meat production and grazing management as well as the origin and history of sheep farming in various parts of the country.  Sheep produce the raw material that we artisans use in our work, and once we start learning about what makes a good fleece, we find that we have learned more than we ever expected about sheep and sheep farming.

Like other animals, both wild and domestic, breeds of sheep have evolved or been bred to survive and thrive in specific environments.  The Gulf Coast sheep of Florida are descended from animals originally brought to North America by Spanish explorers.  Gone feral, they naturally evolved to survive in hot, wet, buggy conditions.  In contrast, Icelandic sheep are a Northern European breed developed over centuries for a rugged, cold land.  Tarhgee sheep are a relatively new breed created by the US Department of Agriculture in the 1920’s to thrive on dry western rangelands.  The American Tunis is the sheep bred for our region—the South.

American Tunis are descended from sheep that originated on North Africa’s Barbary Coast.   The first Tunis sheep brought to this country were a gift to the new US government from the Bey of Tunis in 1799.  Subsequent importations from North Africa and some crossbreeding with European sheep led to the creation of a distinctly American breed.  Today ‘s Tunis sheep are medium sized with cinnamon colored faces and legs and creamy white wool.   Their long floppy reddish ears are another distinguishing characteristic.

The American Tunis is one of the oldest recognized breeds of sheep in this country.  They were raised by both George Washington and Thomas Jefferson and were once the most widespread breed in the South.  The demand for meat by both Northern and Southern armies in the Civil War resulted in their near eradication, but even though endangered for over a century, Tunis sheep are making a comeback.

There are several reasons for a resurgence of interest in Tunis sheep.   This revival is part of increasing interest in preserving all heritage breeds of livestock.  Farmers recognize that these old breeds have qualities that should not be lost.  In the case of Tunis, one significant quality is the ability of the sheep to thrive in the South, but equally important is growing appreciation of the breed for both meat and fiber production.  The meat is reported to be mild, tender, and tasty.  The wool is in the fine to medium range.  It has a good staple length, spins well, and is suitable from a variety of uses including fine clothing to more rugged household items.  Tunis sheep are truly dual-purpose animals, and some would say even triple-purpose.  Their milk is also used to make cheese.   The versatility of these sheep is something that would have been appreciated by nineteenth century farmers.  It is a virtue that modern farmers may neglect in focusing on one marketable product to the detriment of other marketable properties, but we are learning that our ancestors were darn good sheep farmers who knew how to get the most value from their flocks.

US wool production began to seriously decline in the 1960’s due to growing production and marketing of man-made fibers.  Other factors such as competition from wool producers overseas and the movement of textile manufacturing offshore further impacted American sheep farmers, but the market for wool in this country is changing.  There has been a revival of interest in American-sourced wool for yarns and fine textiles.  Farmers who have sheep with good wool are in a position to take advantage of renewed marketing opportunities. 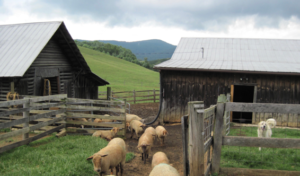 Ronald and Joy Jones of Fries, Virginia maintain a small flock of Tunis sheep, and this Spring the ladies of Blue Ridge Fiberworks used wool from Ronald’s sheep to produce a line of fine yarn for a couple area yarn shops.   While this enterprise is only in the beginning stages, the ladies are enthusiastic about the potential for spinning and selling yarns from the heritage sheep of the South:  the American Tunis.